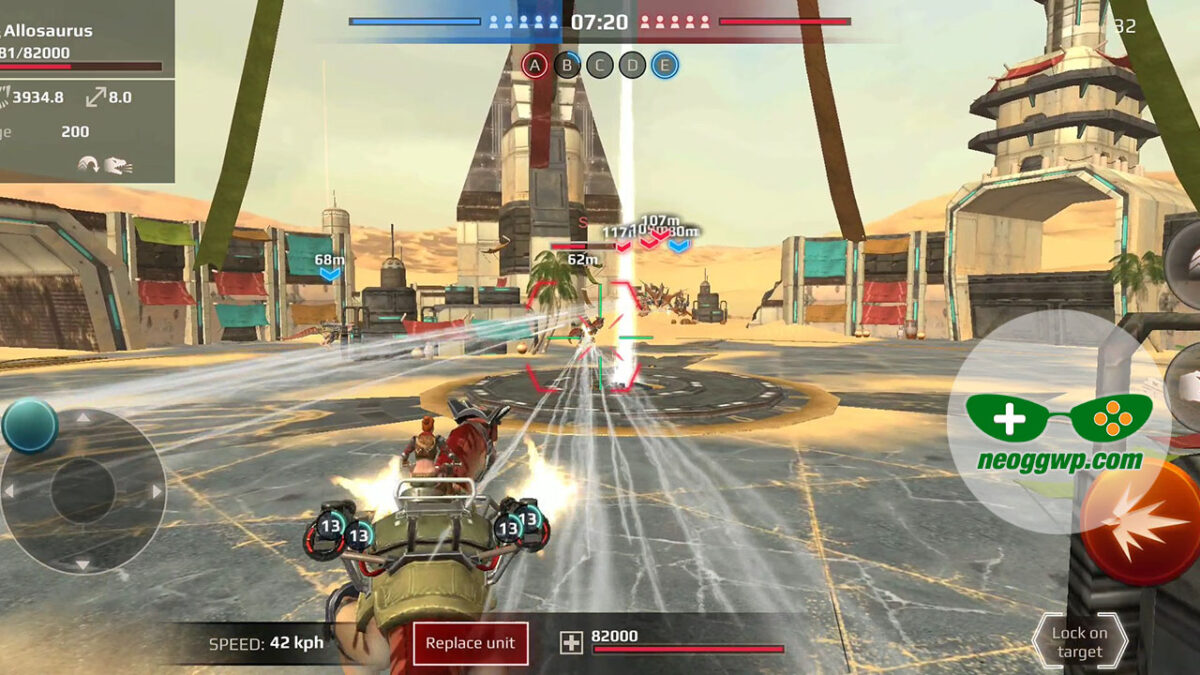 What would you get if you combined Dinosaurs with guns? The answer is Full Metal Monsters. It is one of the best free Android games that feature multiplayer. The premise of the game is simple — the player is a dinosaur rider/fighter who commands the great beasts into battle. The beasts in the game are well equipped with dangerous guns and explosives. As the players level up, they can arm their dinosaurs with upgraded weapons, armor, and abilities. You can also unlock new and bigger dinosaurs as you progress further. It is one of the best action-adventure mobile games available on Android right now.

Full Metal Monsters is an epic new mobile shooter than challenges you and four teammates battle it out with five opponents for dominance over five key locations in an arena. It’s Battlefield’s Conquest mode on a much smaller scale.

Right away, you’ll probably be quite impressed with the level of polish. It’s a bit of a looker, shooting is satisfying, and the controls are kept to a minimum so it’s easy to control on mobile with touch controls.

There’s also a wide variety of impressive-looking dinosaurs to ride into battle. These vary from fast-moving Velociraptors to flying Pterodactylus. You can equip each one with a variety of different weapons from machine guns to rocket launchers,

Each dinosaur can carry two weapons at once – either two of the same, or two different. Early on your options are limited, but pretty quickly you’ll be able to truly craft your playstyle by combining weapons and the unique move set of each dinosaur.

Dinosaurs also have their strengths and weaknesses, with stats like HP, Speed, Damage, Range, Armor, and Shield varying between the different monsters. Ultimately, there’s a lot of depth to customize your finely-tuned killing machine to bring into battle with you.

Dinosaurs have their strengths and weaknesses in Full Metal Monsters

But there is a pretty noticeable issue with Full Metal Monsters, and that’s how close it flirts with pay to win. Dinosaurs range from free options, which you unlock as you level up, and paid options. While all dinosaurs can be equipped with whatever weapons you purchase or unlock, there’s no way to customize each one’s base stats.

While we haven’t seen the full extent of it yet, it’s pretty painfully obvious that if you buy the best dinosaurs outright, you’re going to demolish on the battlefield.

Not only that, but you have to buy new respawn points – known as Riders – with the premium currency. You do get plenty of this for free from leveling up and watching ads, you’ll have a pretty big advantage over your opponent’s team if you buy a bunch of these.

This also has negative effects on the gameplay besides the pay to win aspects. Each player can only spawn once during a battle by default: right at the beginning. Once dead, you can’t respawn unless you have extra riders.

As a result, matches are usually over within the first minute. However, if you’ve paid for a bunch of respawns, you can keep coming until the opposing team is all dead. You can pay your way to victory without skill even playing a part. Not only that, but it’s pointless making the default mode Conquest when the entire match plays out within a minute, and all players just rush to the center to see who can kill the other first. We tried to play properly, capturing points on the periphery, but there wasn’t any real point in doing so.

The final nail in the coffin is how painfully easy the shooting mechanics are. You don’t even need to aim! Simply hit ‘Lock Target’ and your dinosaur will continue to shoot the nearest target automatically until they’re dead.

Given that every player can do this, the contest is determined by who’s pumped the most cash into their weapons. If aiming doesn’t play a part in killing an opponent first, then all you need to do is to pay for the most expensive weapons to automatically win. Again, pay to win rears its ugly face.

So while we were initially impressed with the level of visual polish on display in Full Metal Monsters, the blatantly obvious pay to win that infests the entire experience makes it difficult for us to even describe this as a game. It’s just a pretty virtual clash of credit cards, with no skill playing a part at all.