Rainbow Six Siege is an accessible and deeply satisfying shooter that rewards planning and teamwork over a quick trigger finger.

What is it: A tactical multiplayer first-person shooter

‘Come get your armor, nerds!’ said RonBurgundy69. He placed a container on the ground and danced around it. I wish he could’ve seen my grin. It was the kind of small light-hearted gesture that kept an entire evening of Rainbow Six Siege from teetering off into a hapless string of simple mistakes, head-to-keyboard contact, and creative insult slinging. Because without teamwork, no matter how messy, Siege is just another deathmatch shooter, one where you can reinforce or smash walls. But with teamwork, Siege is a game where you can reinforce or smash walls and tiny, fleeting relationships—more dating sim than twitch test, and it’s this special social element, combined with an impressive amount of tactical depth, that makes Siege one of the best competitive shooters I’ve played.

Rainbow Six Siege’s primary mode is a five-on-five objective-based multiplayer, with each team either defending or attacking an objective. But you don’t just get thrown in and shoot one another willy-nilly. Every round opens with a planning phase, in which the defending team uses character abilities and resources (wall reinforcements, barbed wire, traps, explosives) to slow down, distract, or destroy the enemy team’s encroachment. During this phase, the attacking team sends in tiny remote control drones to sneakily survey the defense. Holding down a button marks the last spotted position of defending players, while other defensive structures are communicated over voice chat. While this is happening, each team is ideally coming up with a strategy.

We need to talk

Plans initially form based on which operators are picked, because their special abilities arm the team with different tools. On offense, we might focus on making noise and chaos by choosing characters who can break reinforced structures, send a series of cluster grenades through walls, and carry flash grenades. Or we could go in surgically, assembling a team that can detect and take out electronic devices, carry big riot shields, and precise weaponry. 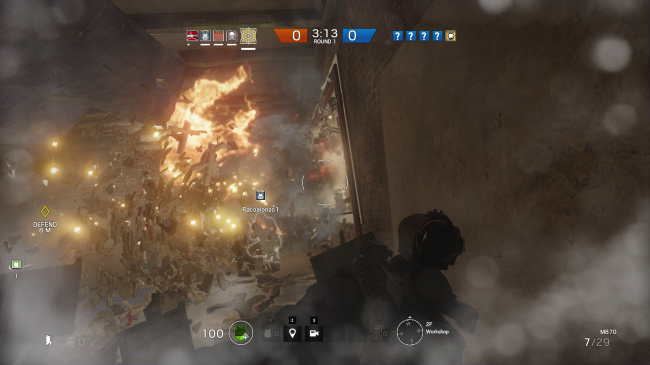 No matter what kind of defenses your team has, there’s an operator that can counter it.

A plan might then evolve based on the recon stage. After scouring the map with drones on offense or stationary cameras on defense, we consider where the enemy might come from and base our strategies around map advantages or disadvantages. With destructible surfaces, it’s important to remember that sightlines aren’t just limited to open doorways or windows, but any breakable surface. Each map is a labyrinth of levels, rooms, and surface types, littered with all sorts of domestic debris. The aural landscape is decidedly less busy, the only component beyond natural ambiance (the low hum of a refrigerator, a distant house party, barking dogs) are the footsteps of players and short bouts of percussive violence. It’s an eerie effect that contributes to the urgency of proper preparation. There’s less than a minute to find the objective or set up defenses, which imbues every decision with weight and consequence. For RonBurgundy69, throwing down that body armor was probably quite the thrill. 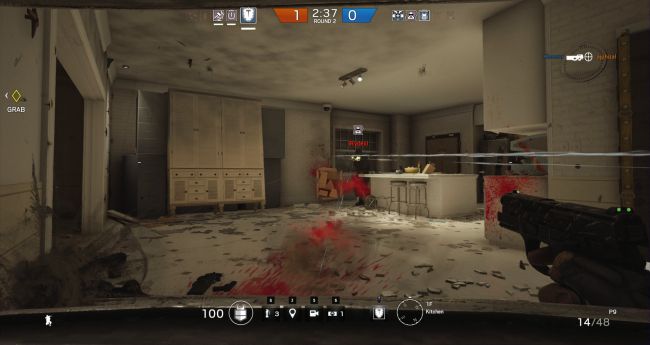 I know, because when I’m setting up bulletproof barricades as Castle, I brace my entire self against the F key as the dense weave unrolls and snaps into place. A voice in the back of my skull says, ‘You should’ve barricaded the south door, idiot.’ Or as Thermite, when I watch the fuse on a breach charge begin its slow path towards detonation, I kick off a debate over when to start cooking a frag grenade. The internal friction is such that I feel my heart might pop or I’ll make a mess in my pants before the shooting even starts. I love this kind of (self) destructive tension, even if I’m not sure it’s good for me. Granted, I’m easily anxious. FPS games typically bank on reflex, and I’ve never been quick enough to excel. But Siege banks more on slow burn psychology rather than twitch skills.

There’s a maddening cycle of thought involved—it makes me think about how I’m thinking the more I play. We were constantly disrupting our habits. On defense, our initial instinct was to hang out in the objective room and build an impenetrable fortress. It worked half the time. Then we got the idea to use the objective room as a trap. We fortified it as normal but hung out on the outside perimeter until the enemy team gathered around the objective, at which point we’d come in from the floor and ceiling, breach a few intentionally open walls, and lay waste.

But now we expect them to expect that plan, which means we revise to accommodate for layers and layers of potential. Siege is best as a psychological race, where you’re attempting to outwit instead of outshoot your opposition. 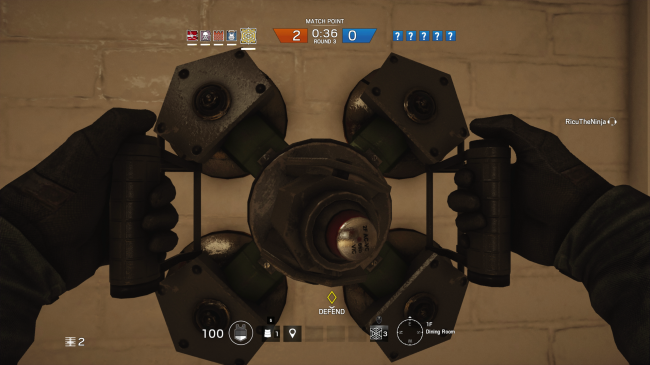 This funky fella prevents grenades from exploding in its general vicinity.

The race isn’t so simple, though. It’s not always easy to find a random group of people willing to forgo old win-win-shoot’em habits to develop a good plan, so a vague restlessness saturated each team. Out of this, archetypes began to emerge, and usually for the better. Any time the Lone Wolf somehow took out three enemies, when the Bumbling Idiot (me) pressed the grenade key instead of the healing key, or when the Lame Leader barked another lame command, I felt a thrill, laughter, frustration, something—all from my teammates’ personalities emerging through their play styles. Siege is an incredibly expressive game, and though I love playing with rigid tacticians, it’s far from a waste with a motley crew.

Finding buddies isn’t difficult. In my fifteen or so hours of play with the final version of the game on and after launch, I’ve had no issues with matchmaking, the outlier being an instance or two where it took longer than a minute. And play has been smooth for the most part. About one in every ten matches has some kind of lag or server desync issues, but there are usually players with an absurdly high ping in each of those matches, too.

To have the motley-est crew, you’ll need to unlock some operators. All 20 are locked behind Renown from the get-go, which is a currency tied to winning matches, completing challenges, and performing helpful operator-specific actions. Some may be concerned about the presence of consumable Renown booster microtransactions means that unlocking all of the operators will be a grind. It’s not.

After completing all of the Situations (singleplayer tutorial missions), watching the tutorial videos, and playing a few rounds of multiplayer (a two-hour process), I unlocked over half of the available characters. The Renown drip slows down as you unlock more operators in each category, but in another four-hour session, I earned enough Renown to unlock four more. The remaining microtransactions are limited to gun skins, purely cosmetic flair, most of which can be earned through Renown in time. None of them are necessary (unless you ask me about the floral skins) or get in the way of playing the game, and with the promise of free maps and operators for everyone henceforth, the presence of microtransactions feels constrained in Siege. If only the narrative was considered as much. 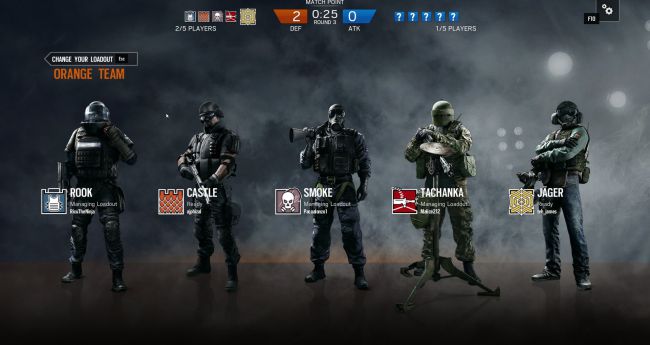 The lack of a campaign will smart for some, but small doses of story hurt Siege more than if they weren’t there at all. Terrorists are wearing white masks, constructing a biological weapon, and generally messing things up in suburbia, airports, banks, and cafes on Christmas. The result is a loose assemblage of domestic imagery, all of which is too evocative of recent tragedies to feel tasteful.

While I’m happy to see that the enemies aren’t whack-a-mole Middle Eastern stereotypes, I can’t say I felt super enthralled playing a bomb disposal level where the fiction is that the terrorists gassed and gunned down students en masse on a college campus. This isn’t to say these places or situations are never to be grounds for fiction, but that the gameplay fails to say anything meaningful about them beyond ‘terrorists bad, military force good!’ is pretty reductive and disturbing.

More trouble stems from the gunplay. Every other action in the game is a personal burden, the placement of defenses, insertion points, and communication—a single bad decision can make or break an entire match. The guns don’t feel as if they carry the same weight. Feedback is light and recoil is very forgiving. This allows for the sloppiest moments in Siege. Gunfights are loud, short, and have the potential to devolve into familiar run and gun twitch bouts. Moments like this run counter to Siege’s emphasis on cunning and patience, but since shootouts make up the smallest part of the game, I don’t feel they disrupt my enjoyment entirely. I’d just like to sweat before each trigger pull as much as I do before reinforcing a wall. 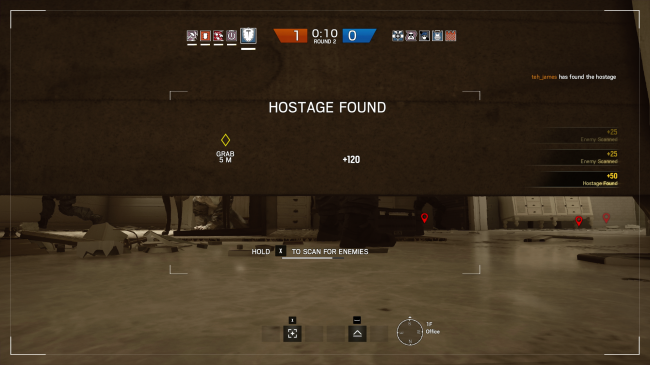 The recon stage is hectic and vital. Without finding the objective, there’s less time to prepare a proper offense.

But Siege makes me sweat enough. More than enough. So much, that I have trouble playing it for long stretches. It’s an intense, hyper-focused, game—’game’ in italics for emphasis. In italics, because it’s possible to talk about Siege in the same watercooler conversations as CS: GO or Dota 2. In italics, because they look cool and so is Siege. It makes no bones about what it is and nearly no compromises for its design as a Tactical Multiplayer Shooter™, and I admire Siege for that.

Most tactical games take a while to get there: the tipping point where I’m no longer struggling with controls, communication, or match flow. After the first match in a typical game of Siege, I know my role, my team and I have developed a relationship, and we’re settling into a unique rhythm. For a game with so many branches of complexity and potential, Siege is the only shooter I know that encourages such tactical depth, player expression, and creative team play. It’s a game that wastes no time getting to the primal, creative, social, everything core of what makes competition so much fun.