Detailed Review about Fortnite a Different Game Made for Thrilling, Tactical Battle - ePinGi 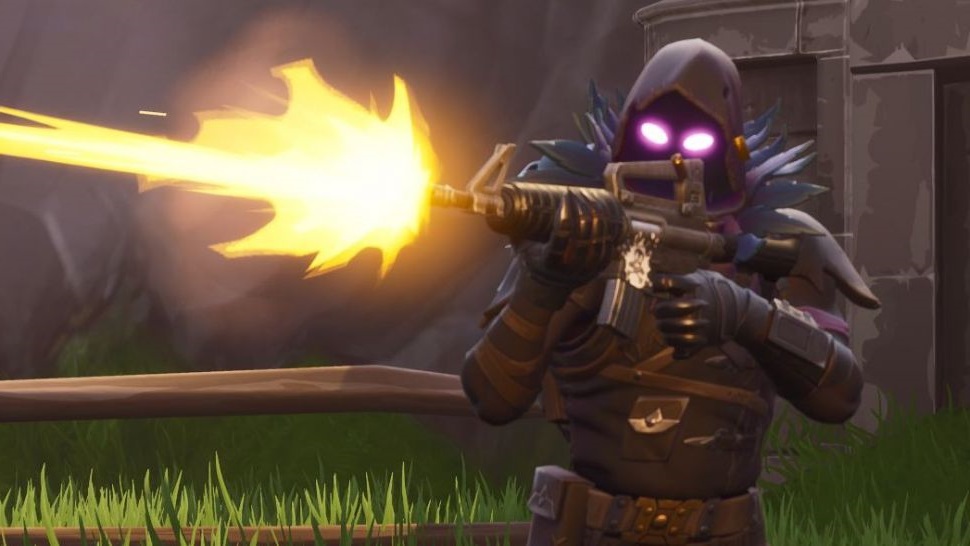 There’s a thrilling shooter-builder battle royale monster beneath Fortnite’s building system, and it’s more fun slogging through endless failure and a lopsided map to find it than you’d expect.

What is it? A F2P Battle Royale game featuring weird gadgets and a fort-building system
Expect to pay: $10 for a Battle Pass, $5+ for cosmetics
Developer: Epic Games
Publisher: Epic Games
Reviewed on: Intel Core i7-6820HK, Nvidia GTX 1070, 32GB RAM
Multiplayer: 1, 2, or 4 versus 99

My crosshairs rest a few centimeters above the pink teddy bear’s head to account for bullet drop. They haven’t seen me yet—I’m wearing a bush costume—so I’ve managed to flank their shoddy wooden 1×1 recon fort to get a bead from behind, crouched at the top of a grassy knoll. Silent and still, I am the bush.

But the moment I pull the trigger, I hear the telltale sound of a guided missile launcher firing an RPG from somewhere behind. Ca-chunk. Startled, I jerk my hand and miss my furry pink target by miles. My quarry builds a second floor, brick this time, with the interior ramp angled for shooting in my direction. A guided missile soars overhead, a man in a bunny suit wearing a hockey mask surfing it like a hoverboard. The rocket-propelled funnyman is headed for the pink bear’s brick house, like the tragic end to some new folk tale. Missile, bear, brick, and bunny collide. Dead on impact, guns, ammo, and building materials rain out. I bush-waddle over and perform the electric shuffle on their corpses. Only 10 players out of 100 remain, and I haven’t killed anyone.

Matches on Fortnite’s crowded cartoon island play out with more surprise, variety, and laughs than any other battle royale game, though its klutzy fort-building system and steadily growing library of gadgets and guns can demoralize newcomers before they understand what they’ve been gifted. Initially released as a cooperative base-defense shooter, Epic responded to the success of PUBG and pivoted hard, developing Fortnite Battle Royale in two months. It’s since become such a massive phenomenon that we felt the Battle Royale element was now worth evaluating on its own merits, in part because it relies on a different monetization model than the PvE mode but mostly because it feels like a completely different game. The basics are textbook battle royale: 100 players (either solo, duos, or squads of four) leap from a party bus suspended beneath a balloon set on a random vector over the map. Wherever they land—whether the tight, tall city block of Titled Towers or alone cabin nestled between two steep hills—players need to find guns, shield potions, building materials, and special items as quickly as possible. Stocking up is key to staying alive in Fortnite. Not only do you need effective weapons at every distance, but you need enough resources to build a brick house to huddle in while you chug shield potions, or so you’re ready to race against another player for the high ground with your own wooden folly.

It’s a system originally designed for the slow pace of the Save the World PvE mode, where hordes of zombies shamble your way, and ought to make for an unnatural fit in Battle Royale. But fit it does. The best players can switch between tiles as quickly as Quake experts swap weapons, assembling dizzying towers, editing doors into walls, holes into floors, and spinning switchback stairs out of flat ramps. It’s all done with editing tools that, however simple, weren’t built for the fast pace of mouse and keyboard firefights.

Learning to build quickly is as challenging as picking up your first MOBA or RTS—it presents a new language to master with a skill ceiling as high as you can build one. But put in the time, reassign some keys, learn to smash everything in reach with your pickaxe, and building becomes as second nature as any new skill does. But I’m desperate for a practice arena or formal tutorial—for now, heavy YouTubing is mandatory.

An ideal battle in Fortnite is two players racing for the high ground, slamming together brick recon towers and trading rifle shots until someone runs low on ammo. One player strings together some ramps off the lip of their tower to get a clear view of their opponent from above, but the other player edits holes in their tower floors until they reach the ground. They throw a few walls up for cover and shoot out the founding bricks of the sky-ramp, sending the structure and the player on top of it tumbling to the ground.

What sort of PC do you need to run Fortnite?

Since Fortnite is free, it’s easy enough to find out if the game will run well on your system. But if you want to know what the various settings do in terms of performance, and how the different AMD and Nvidia graphics cards stack up, our comprehensive Fortnite settings and performance analysis has the answers.

This architectural combat jazz is the norm, neither position necessarily ensuring life or death for the other player—there are still plenty of ways out of or into a mess. A well-placed launch pad from above could jettison the player higher, allowing for a second, smaller skydive down to a better position from their vantage. Our ramp-destroyer could retreat into a house in a nearby village and layout some spike traps, using a dance emote to play a song in a bid to attract their prey. Or maybe they outfit a nearby chest or loot llama (llamas containing loot) with C4 and wait. The sheer variety of tools, combined with a building system that rewards creativity and reflex in equal measure, results in the most erratic, exciting, and challenging battle royale combat there is.

Such build-offs only happen once or twice per match. The rest of the time is spent scrounging for supplies in abandoned prisons and flooded forests. A small map (though PUBG’s latest is on par) compresses players just enough to ensure you’ll run into someone every few minutes. Some hot spots like Tilted Towers and Pleasant Park are high-risk but extremely rewarding. The downside is that they thin out the crowd quickly, leaving anyone who dropped elsewhere wanting for action and resources. But like the item pool, Fortnite’s map is as open to change as anything. The western half has already been the subject of a total makeover, though I’d like to see the iteration become as frequent and experimental as the item pool.

Compared to PUBG’s weighty movement and ballistics, Fortnite’s low recoil weapon handling makes slipping into firefights easy. Close encounters too often rely on shotguns, leaving SMGs and silenced weapons by the wayside, but they’re all satisfying to use. The SCAR assault rifle fires like the military’s take on a spitwad cannon and up close the super shotgun might as well be a deafening win button. Rockets, while slow, fire with a satisfying plunk and lay waste to the sturdiest forts, while C4 makes for a stealthier destructive option. Problem is, having what you need for a given shootout is all up to chance.

New weapons and gear are added by Epic so often that there are guaranteed mismatches, exacerbated by lady luck. You could open as many chests as anyone else and earn a death sentence just because they happened upon the motherlode and all you got was four common pistols. The RNG, bless its heart, can be frustrating, but the chances of winning a given match are already so low that losing soon becomes the norm. Accepting that perfect, holy, eternal game balance is not a priority in battle royale is key to enjoying the genre. You will get screwed over, frequently, and you will largely still like it.

But how your pseudo-Dreamworks movie protagonist stumbles into their demise is a slapstick mistake with a message: don’t walk through open doors without checking for traps; don’t throw the bomb that forces you into a dance routine at the floor; or, never stand still while chopping down a tree. That’s how you get sniped, the worst way to go out in battle royale. The first goal is to get good enough that most matches end in a wholesome full-body chuckle. The second is to win.

Finding the seventh hidden lawn gnome is a decent salve for any shameful death. With each season a new Battle Pass arrives, Fortnite’s progression scheme and gateway to earning in-game cosmetics. Opting into the full season pass is fairly cheap, about $10 for the 10-week affair, though a free option exists with fewer challenges and rewards. A diligent enough player can earn the bulk of each season’s skins, backpacks, pickaxes, skydiving particle effects, dances, emoticons, XP boosts, and loading screen art through daily play.

The losses would be a little harder to swallow if I weren’t so proud of my own loading screen, a dazed cartoon unicorn set against a rainbow and a pink background. No shame—it represents dozens of hours of work towards each week’s new challenges, tests that reward you for playing well (get three sniper kills, scavenge seven chests at Tilted Towers), and some more off-the-wall quests that’ll have you treating each match as a treasure hunt instead of a survival gauntlet. The latest update even added hidden dance floors for a new challenge, and I’ve already seen players forget about the encroaching storm in order to peacefully break it down for a few minutes. 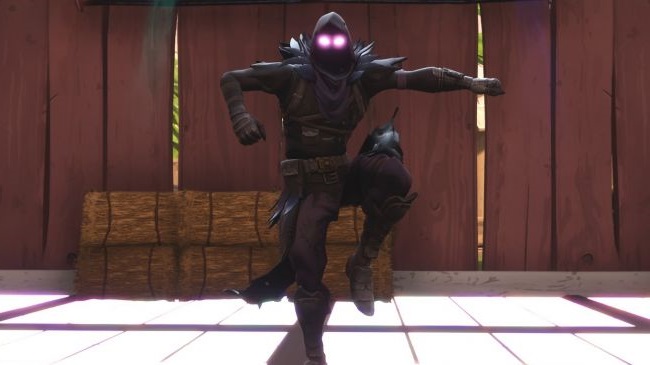 Most of these side activities are no more complex or rewarding than any MMO quest, but because the odds are always against you and crushing defeat is to be expected, unearthing treasure or dancing with strangers in an ongoing journey to unlock a John Wick costume is a welcome diversion from how bad I suck at building. I brought a new outfit to the club last time, the edgy, dark Raven outfit. It cost me an absurd $20. I suppose I could have saved my V-Bucks from completing season challenges, but I knew what I was doing—there are no random chance loot boxes in the Fortnite store, just my own inhibitions, and thirst for attention. Fortnite is free, but clearly, I am not.

And maybe because Fortnite is free, or because it’s so scalable and runs flawlessly on years-old systems, or because you can team up with friends on a console and a damn telephone, but enough players stuck around to force Fortnite’s building system into something fun despite a steep learning curve and clumsy controls. It was a miraculous design hail mary that has worked sensationally. The time and pain I’ve poured into learning such an obtuse system for an otherwise approachable, cartoonish battle royale game has easily paid off. There’s nothing like Fortnite out there.

I mean, I’ve had matches where I sabotage the final two players, each in their own tower firing rockets back and forth like petty videogame aristocrats. Slumming it, with no shield and only a pickaxe to my name, I toppled their fortresses from below just by putting my back into it. In the limited run 50v50 mode, I’ve seen matches climax with dozens of players pushing massive fortresses toward one another, gunfire and explosions failing to push back opposing tidal waves of wood and brick and steel spilling forth, stupid cartoon rabbits and crazed nutcrackers with M16s doing the Carlton and the Worm up top during brief lulls. A memorable squad match devolved into me and some 10-year-old fighting for survival in the top ten, more emotionally fraught than any post-apocalyptic coming-of-age tale. And yes, I died for them. That’s a bush life.