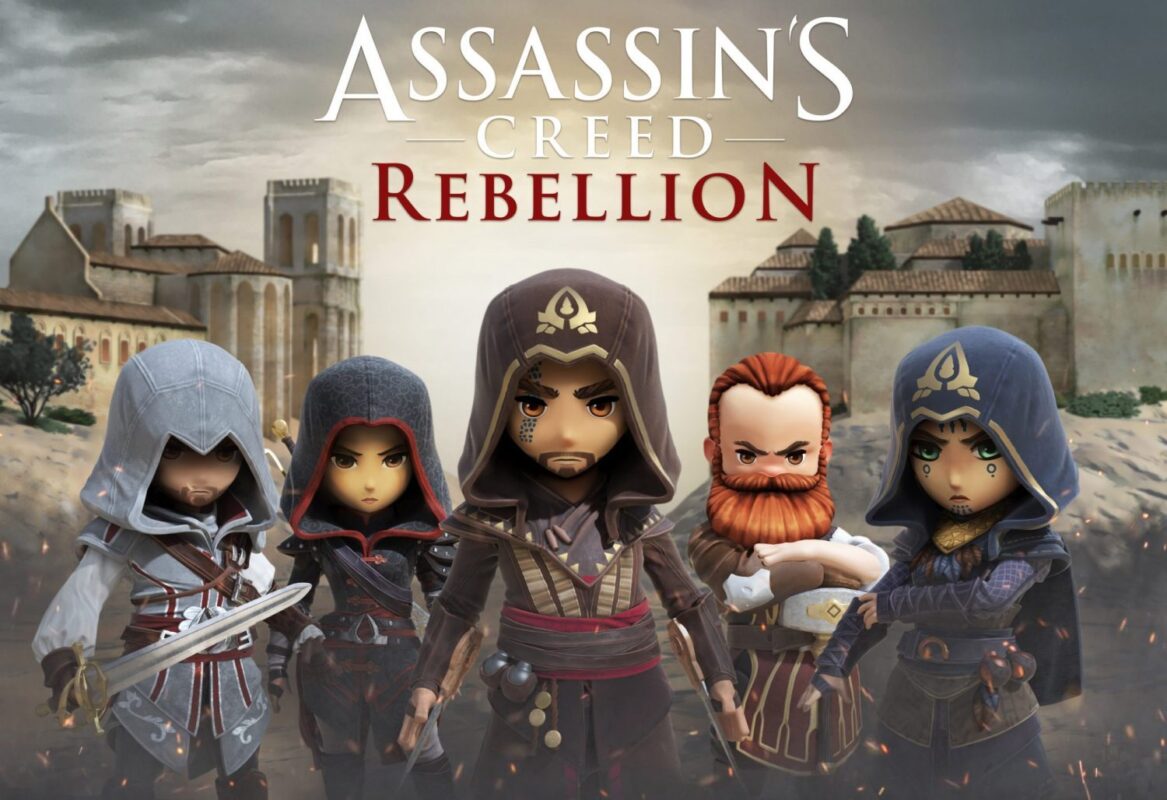 One of the Best ios game Assassin’s Creed Rebellion is a free-to-play strategy RPG in which players assemble a Brotherhood of powerful assassins to fight back against the Templars and the oppression in Spain.

As your Brotherhood grows, your fortress will expand and you’ll have the ability to improve your assassins’ skills, craft new equipment, and create new medicines. There are more than 40 characters to choose from, including legendaries and some brand new to the Assassin’s Creed series — plus limited-time events and premium access if you want it.

Rebellion is one of the first titles to take advantage of the extra powered offered by Apple’s latest A12X chip in the new iPad Pro lineup — and it looks spectacular — but it can be played on earlier iOS devices, too.

A few years ago, it was very common that the main publishers and developers of video games looked for ways to adapt their big sagas or licenses to the thriving mobile market. Everything was worth it. 2D versions of 3D games, on-rails shooters, management titles, cards or puzzles and even failed versions of PlayStation Portable or Nintendo DS titles. The increase in power of these terminals, which ended up settling in modern life until they were indispensable in everyday life, eventually set this trend. If you searched the App Store or Google Play for the name of some great saga, it was very likely that it had a version for smartphones. However, as they say, greed broke the sack.

Ubisoft has tried on other occasions to find the perfect formula when moving one of its main bastions in electronic leisure: Assassin’s Creed. He has tried everything from adventure and stealth titles such as Assassin’s Creed – Altair Chronicles and Assassin’s Creed: Rearmed to other collectible cards such as Recollection and the recent Assassin’s Creed Memories with very different luck. Now, while the saga triumphs again on consoles thanks to the rebirth of the license with Origins and Assassin’s Creed Odyssey, they try again with a free-to-play video game that mixes role and strategy in a somewhat novel way.

The rebellion will start in Spain
Assassin’s Creed Rebellion, developed by Behavior Interactive, is presented as completely free tactical role video game. The idea of ​​the title is none other than to transfer the most classic elements of the series, such as stealth, parkour and the most spectacular murders, to a more leisurely and strategic approach. Although this may seem almost sacrilegious, especially considering that the speed and tone with which these games are usually performed on consoles and PCs, the truth is that despite the initial shock, it works quite well.

To put ourselves in a situation, the application moves us to the time of the Holy Inquisition in Spain. Torquemada is allied with the Templars, and they are looking for one of the so-called Fruits of Eden. While the inquiring hosts accuse those who oppose their designs and religious beliefs of heretics and traitors to the Faith, a group of Assassins choose to rebel and seek ways to return order and stability to the kingdom and the crown. One aspect that has been very curious to us is that the video game follows more or less freely the argument of the film adaptation of Assassin’s Creed, including even characters from the film starring Michael Fassbender as Aguilar and his partner María.

The objective of the game is none other than to raise the people against the Inquisitors and the Templars, who have poisoned the minds of all the inhabitants of the region, while we try to get ahead of their steps and constantly search for the aforementioned artifact. To disrupt the plans of this organization and its faithful we will have to forge a Brotherhood, recruiting assassins and launching us to carry out missions throughout Spain, robbing them of resources, infiltrating us in their camps and disarticulating their status of power. The idea of Assassin’s Creed Rebellion is that each player creates his own team of Assassins and specialists to face the different orders that we will have to face, carefully choosing our members from a catalog of more than 40 different Assassins and a huge number of allies and partners.

A turn-based tactical role-playing game with an emphasis on management
Our first contact is with Ezio Auditore, the protagonist of Assassin’s Creed II, with whom we will have to learn the dynamics of the game and its subterfuges, including mechanics and aspects to consider in each assignment. Ubisoft and Behavior Interactive have set identical standards to those of other tactical video games, in which we will have to evaluate the possibilities of each situation before performing an action. Through a lateral perspective in two dimensions, although it has a presentation and 3D graphics, we will have to kill, infiltrate and hide from enemies while controlling our resources and success options.

The levels are divided into a series of rooms or individual compartments, offering us most of the time several paths or routes to follow. Do we prefer to infiltrate without making noise, jump over the rooftops and avoid being seen or ride? Each decision has its consequences and its own cost in probabilities of success because not all characters have the same skills on the battlefield. For example, if we abuse infiltration skills or master killer Aguilar constantly, their success rates will fall, so we must take into account the way in which we will arrange our teams of murderers before committing crazy things.

These levels are very varied in distribution, although they enjoy a very different length and sometimes a bit bland design. Of course, we will find from mansions and hamlets to castles or churches, locations full of rooms and rooms or secret corners. While we can go on doing the mission, which can be from sabotaging a camp to stealing some documents to killing a dangerous Templar, it never hurts to spend some time and find a way to get to that chest that we have seen by exploring lightly stage. Since we talk about a tactical video game with touches of role-playing in shifts, we will have time to think and plan our actions, something that helps the comfortable and well-designed interface, clear and very colorful, which will advise us with skills and possibilities to use at all times. Ubisoft and Behavior Interactive have designed Assassin’s Creed Rebellion as a kind of basic X-COM with touches of This War of Mine since every situation can become a matter of life or death if we are not hustled. We are not talking about a difficult game, in fact it is quite simple most of the time, but it is true that this increase in complexity is very noticeable after the long initial tutorial, since when they leave us at our ease we must deal not only with the missions and commissions but also with the ubiquitous control of the resources of our settlement and with the improvements of the members of our Brotherhood. Is this a trick for us to go through the box or a real handicap to make the gameplay more challenging?

Keep in mind that combining a competent, versatile and off-road team for all types of situations is not an easy task. If we are successful in our missions we will receive resources, which can be in the form of information -necessary to pay the cost of the missions-, coins or Helix credits , which will help us get DNA fragments with which to unlock new killers and characters There are many and varied, from the aforementioned Ezio and Aguilar to others such as Shao Jun, Claudia, and Machiavelli, all with their own characteristics, as well as a whole legion of followers and recruits. From infiltration experts to other versed in the attacks of great melee damage, setting up a set can turn against us nor do we know how to manage our assets well. Therefore, the management of our Brotherhood and that of our refuge – located in the Sierra de Cazorla according to the video game – will be vital. This refuge, as in other similar role-playing video games, is our base of operations. In it, we will manage our resources and plan our next blows, as well as train our killers. We can go extending stays, developing them and making them more efficient, something that will increase our chances of success. For example, one of the most interesting aspects is to improve the office and thus obtain more information resources or train our recruits in the training room so that they level up quickly and become more showers in the missions and in their tasks.

In this regard, it should be noted that Assassin’s Creed Rebellion, like other video games of the style, is a title focused on free-to-play, and therefore, has its main source of income in micropayments. We are in the same as always with this type of videogames: it is possible to move forward without spending a single cent, yes, but the speed of progress suffers if we want to go faster from the account. That is why we will end up committed to taking into account the usual loot boxes – full of recruits or DNA fragments for the most powerful murderers – rewards and other aspects. In fact, and as in other similar applications, we find even systems of subscription and high-cost packages that will give us a boost in each and every one of the parameters of the game.

Visually very charismatic
Assassin’s Creed Rebellion is committed to a very groundbreaking style, unusual in the saga, which can polarize audiences. We find a cartoon design, very friendly, with characters that bet on an SD or super deformed aspect, a constant in many of the Japanese role-playing videogames. Despite the shocking results in a first glance, it works. It is very nice to see and it shows that Ubisoft has invested enough to bring personality reflect the appearances and aspects of some of the most famous murderers of the saga. The scenarios are equally lustrous, although they do sometimes suffer from an excessive repetition of forms and distributions, as well as environments, something that can lead us to believe that we are trapped again and again in the same place. In our analysis, we have played on an iPhone X and a 6th generation iPad, and on both devices, the title has performed especially well. The app is translated into Spanish.

Assassin’s Creed Rebellion is an entertaining video game, with ideas and mechanics that adapt perfectly to the touch screen. Its combination of role, strategy, and management is very interesting, and it has certain successes in its approach that we believe marry very well with the Assassin’s Creed saga. Creating a Brotherhood, giving new life to mythical characters in the series and betting on such an original design and presentation make him earn many points. However, its free-to-play execution may not please everyone, and it is likely that not all players are willing to face this type of toll